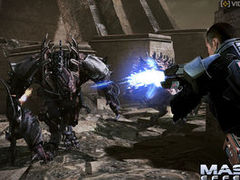 Mass Effect 3 sold over one million copies during its first month on sale in the US, topping the video game chart for the five week period ended March 31, 2012, the NPD Group has revealed.

Microsoft’s Aaron Greenberg posted on Twitter that ME3 sold an impressive 943,000 copies on Xbox 360, and outsold the PS3 version by 4:1. This suggests PS3 sales or somewhere in the region of 250,000 copies. Figures on the game’s PC release haven’t been released.

“Mass Effect 3 sold more than twice as much as did Mass Effect 2 during its introductory month in January 2010,” explained NPD analyst Anita Frazier.

Capcom must also be relatively pleased with Resident Evil: Operation Raccoon City, which notched up 582,000 copies sold across Xbox 360 and PS3, despite a lacklustre reception from critics.

Nintendo’s Mario Party 9 sold in excess of 230,000 copies, which gives you an idea on how well those games around it performed.

It looks like bad news for Tecmo Koei’s Ninja Gaiden 3, which failed to chart inside the Top 10. EA’s Tiger Woods PGA Tour 13 also failed to chart, but having arrived in the last few days of March, the publisher will be hoping the game enters the top 10 in April.