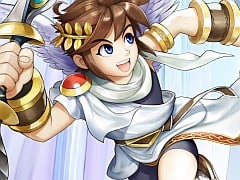 The trouble with uprisings is that someone usually gets hurt in the process, and with Nintendo’s revival of Kid Icarus it’s definitely the player. Sure, at times the corner of your 3DS digs into that fleshy bit of your palm because this white-knuckle ride makes you grip your console a little tighter in your hands. At others, it’s simply because its unconventional controls make it impossible to comfortably hold the device for any length of time.

Frequently, the pleasure of playing makes the pain worth it. When spunky, smart-mouthed angel Pit is airborne, Kid Icarus: Uprising is a dizzying, exhilarating experience: frequently the most thrilling thing on 3DS. It’s a riot of colour and chaos: these on-rails sequences take you through crystalline skies before angry purple storm clouds whip up thunderous hurricanes. You’ll divebomb at sizzling speed past a marmalade sunset, plunging into a canyon to weave between jagged spires of rock. Its vistas may be detailed and expansive but they don’t come at the cost of speed or smoothness. Nor is the 3D forced: there’s depth, but not so much that it’ll strain your eyes. If you’re after a 3DS show-stopper, of the kind to make even Vita owners slack-jawed, you’ve found it.

Then Pit’s feet hit terra firma, the pace drops and the game begins to flag a little. With the power of free movement comes the responsibility of controlling the camera with your stylus: swipes spin it like a trackball while taps stop it from moving. It’s a fine idea in theory, but takes much longer to acclimatise to than the joyous aerial combat. Mastery comes eventually, but it never feels intuitive to the point where you can happily forget about what your hands are doing.

What’s more, it could well alienate a substantial portion of its potential audience. Even with the Circle Pad Pro, left-handed players will almost certainly struggle with this unusual setup. I’ve spoken to two lefties who’ve had serious problems with the on-foot sections in particular. Even with the add-on, it seems an awkward compromise for a system that isn’t altogether user-friendly in the first place.

There is some logic to what may seem like a bizarre design choice. Dual stick controls simply wouldn’t work in the air without compromising the intensity of the experience: it requires the precision and speed of a stylus to aim. The tighter camera and slower pace on the ground, however, wouldn’t be a problem for a second stick. Indeed, Nintendo has included the option to use the face buttons to move the reticule. It’s a curious oversight given how director Masahiro Sakurai regularly caters for a number of different controller preferences.

Indeed, if you weren’t previously aware that this was from the maker of the Smash Bros. series, you’d know within minutes from starting. Even the UI is similar: the menu presents you with a familiar cluster of options and icons begging to be tapped. It’s there in Pit’s dodge, too, a smart piece of design that shows Sakurai understands the satisfaction of physical connection to a game. It mirrors the movement of a smash attack – you slam the analogue stick to either side to quickly avoid incoming projectiles, or flick it forward to dash. It captures the sensation of speedy movement far more effectively than a simple button press.

It’s one of a succession of intelligent systems that underpin the game. Weapons are a case in point. They come in nine different varieties, from sniping staffs to close-range claws, with blades, cannons and bows in-between. Pick a melee weapon and you’ll have to wait for enemies to pass close by, missing out on those further away, though you can bat back projectiles to defeat them. Similarly, you’ll have to keep your distance when using certain range weapons that are feeble in close combat. As such, your approach to each level changes significantly based on your weapon choice. And if you’ve just obtained a new weapon and aren’t sure of your selection, you can test them out in air and on land before you continue the campaign.

Cleverer still is the Fiend’s Cauldron, a difficulty slider that allows you to gamble hearts – the game’s currency – on your own performance. Higher intensities offer tougher difficulty and richer rewards – but if you die, you lose hearts and are humiliatingly kicked back to a lower level. The default setting is 2.0 and that’s still not easy, which should give you an idea of what 9.0 is like. But you’ll constantly be tempted to risk nudging that slider upwards, thanks to areas numbered according to the Intensity setting you need to pick to unlock them. The desire to potentially get your hands on a new, more powerful weapon can be overwhelming, cajoling you into attempting a challenge you’re not quite ready for yet. It’s the perfect encouragement to replay a level before moving onto the next chapter, adding extra value to an already substantial campaign. As if to acknowledge that ploughing through the story isn’t necessarily the best choice, the game doesn’t automatically move onto the next chapter when you’ve finished the previous one, instead allowing you to take a breather and play around with the various other distractions in the interim.

And there’s plenty to keep you occupied. Weapon fusing is the most compulsive aside: each has its own unique look, and while two different combinations might produce a similar outcome, the stats and buffs associated with the newly-forged weapon can vary. Some will offer increased speed, others additional attack power, or status effects to stun and poison enemies. Elsewhere you can donate eggs to a magical fountain to produce idols, 3D models of characters, enemies and weapons that you can examine from the menu at your leisure. New powers are slotted into a grid like Tetrominoes, offering a range of abilities that Pit can call upon in battle by tapping touchscreen icons. You can even create multiple ability loadouts to suit the next level you’re attempting.

Augmented Reality card battles and StreetPass gem-swapping may be gimmicks, but they all contribute to the most content-rich 3DS game to date. The value of handheld titles has been questioned in the wake of iOS’s race to the bottom but you’d be hard pushed to quibble over the price given the range of asides here. The multiplayer modes – essentially solo or team deathmatch variations – are a breezy, throwaway addition, but they’re smartly designed and thoroughly entertaining. A cute touch sees multiplayer referred to as Together, with Nearby and Apart representing local and online options. Trust Nintendo to make virtual conflict sound so friendly.

This light-hearted tone extends to the story. Cutscenes are pleasingly brisk with most of the narrative dealt with in constant chatter between Pit and the goddess Palutena, your guide through the game. The action is often so frenetic that much of the dialogue washes over you until you realise that the story and objectives have almost subliminally seeped into your consciousness. What’s more, while at times it’s goofy and earnest like so many Japanese games are, it’s sparklingly scripted, like a kids’ cartoon you stick on to occupy a younger relative but end up unexpectedly chuckling at. There are some smart fourth-wall-breaking moments, too. Self-referential humour can often fall flat in a game, but the tone is set from the opening with a chirpy “sorry to keep you waiting” as a sly nod to the two-decade gap between this and its NES precursor. Later you’ll see the original 8-bit sprite form of one boss as Pit expresses shock at how much he’s changed, before an invincible foe arrives accompanied by his original theme. It’s the kind of fan service you’d expect from someone whose last game was such a Nintendo love-in.

And just like Smash Bros, it also comes with a corker of a soundtrack from a five-strong super-team of Japanese composers at the top of their game. It’s a whirling mix of themes that takes in wistful bucolia to full-on orchestral bombast, while Pit’s flights of fancy are often accompanied by stirring strings which, at times, echo Mario’s recent intergalactic adventures. This is music that fully deserves to be mentioned in the same breath as the Galaxy games.

It is, then, a triumphant return for a forgotten hero; a dazzling, silly, beautiful adventure that mostly, but never completely, overcomes its control woes. When Pit’s wings are clipped then so is his game, but in the air it’s a different story. Here, Uprising doesn’t fly; it soars.