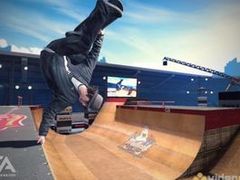 EA has announced that from July 9 gamers will be able to download new DLC making it possible to compete in the Skate 2 Maloof Cup, based on the largest pursed event in the history of professional skateboarding.

The pack will be available in the PlayStation Store for $3.00 and on Xbox LIVE Marketplace for 240 MS points.

“Skate 2 has been embraced by the gaming and skateboarding community across the globe, making it the perfect stage for the Maloof Money Cup’s video game debut,” said Joe Maloof, President of Maloof Companies. “Now players everywhere can experience the world’s greatest skateboarding championship and revel in the high-stakes excitement of the competition for themselves.”