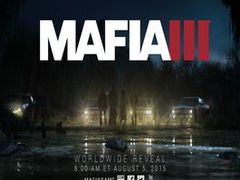 It’s official: Mafia 3 will be revealed at Gamescom next week.

Fans can tune in to watch the first trailer at 1pm next Wednesday, August 5, with more details set to be revealed behind-closed-doors throughout the show.

A release date and platforms for the game have yet to be announced.

2K describes Mafia 3 as “the next installment in the popular series known for immersing players into a world of organised crime through rich narrative storytelling and a beautifully crafted game world featuring period-accurate cars, music and fashion.”

Mafia 3 has long been rumoured to be in development, with one of its predecessor’s lead voice actors teasing in January that there may be “some exciting news very soon”.

The game was first reported to be in development back in 2012 at 2K Czech’s Prague studio, which was later “relocated and consolidated” to Brno. It isn’t yet clear which studio is leading development on Mafia 3.