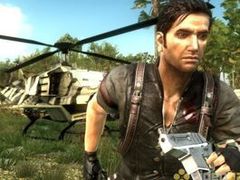 Avalanche Studios boss Christofer Sundberg may have revealed release dates for Mad Max and the unannounced Just Cause 3.

Though the studio head’s LinkedIn profile doesn’t mention the two titles by name, Sundberg states that “Avalanche Studios first licensed game, developed based on a well-known movie license… is scheduled for release in April 2014”.

That title, presumably, is Mad Max.

He also states that an “unannounced sandbox action game” from Square-Enix, referred to as a “new installment in a very well-known game series”, is “being developed at Avalanche Studios New York studio and is scheduled for completion in June 2015 for next generation console platforms.”

The title is thought to be Just Cause 3.

Just Cause 3 has yet to be announced by Square Enix, and while Mad Max is due for release in 2014, Warner Bros. has yet to reveal a specific release date.

The dates could be slightly off, of course. Sundberg still refers to Mad Max as an “Unannounced Open-World Action Game”, suggesting that his profile may not have been updated since the game’s reveal at E3. But nonetheless, the two entries should offer a better idea as to when to expect the two games.