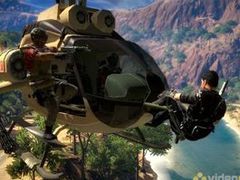 Just Cause dev has ‘several surprises’ in store for 2015

Just Cause creators Avalanche Studios has “several surprises planned for next year” – possibly including the oft-rumoured Just Cause 3.

In an email sent to VideoGamer.com this afternoon, the developer said that “2015 is set to be the biggest year since the inception of Avalanche Studios more than a decade ago.

“Next year, players will be able to roam the lethal open-world wasteland of Mad Max. In addition, theHunter is on a record breaking streak. More than a million players have signed up for the world’s most realistic wildlife experience since the Steam introduction earlier this year, bringing the total number to over 4 million.

“Avalanche Studios also has several surprises planned for next year.”

Just Cause 3 has long been rumoured to be in development at the studio for next-gen consoles, but has yet to be announced by publisher Square Enix. It was rumoured last year that the game could be due to launch in summer 2015.

As well as revealing the new surprises, Avalanche also has plans to move to a new, bigger location in Stockholm in autumn 2015 to create a “next generation studio space”.

In Just Cause, you take on the role of the flamboyant Rico…

In Just Cause, you take on the role of the flamboyant Rico…