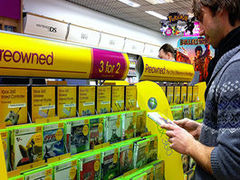 July was worst ever month for UK games retail

July was the worst month on record for UK games retail, according to a report by MCV, with just £21.4m spent on physical video games. The previous low was £23m back in July 2013, the mag says.

Only 792,000 physical games were reportedly sold throughout the month, with LEGO Star Wars: The Force Awakens being the best-selling. Uncharted 4, Overwatch, FIFA 16 and DOOM all made up the rest of the top 5.

While the runaway success of Pokemon Go probably didn’t help, it was a relatively quiet month for new releases in general, with Monster Hunter Generations, Star Ocean: Integrity and Faithlessness and Carmageddon: Max Damage arguably being the three biggest physical releases of the month.

Things should hopefully start picking back up in August, though, with No Man’s Sky, Deus Ex: Mankind Divided, F1 2016, Assetto Corsa, Attack on Titan, God Eater 2: Rage Burst and World of Warcraft: Legion all releasing this month.

The release of Xbox One S may have also helped ship a few back catalogue Xbox One games, too, with sales of the console said to be up 75%.