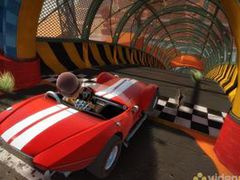 Joy Ride Turbo, what’s thought to be a sequel to the Kinect racing game which launched alongside the controller, has been spotted on the Australian classification board.

The game was classified G on April 5, with Microsoft listed as the publisher.

Joy Ride was first announced back at E3 2009 as a free-to-play XBLA game, but was reworked to make use of Kinect. It’s fair to say Joy Ride wasn’t the best launch title, but we hope a few more years experience with Kinect will make the sequel a better game.