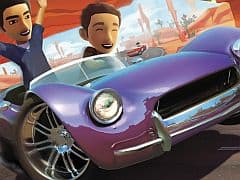 Joyride, then: The game originally designed as a free-of-charge XBLA title that crossed over into Kinect territory earlier in the year. Joyride is one of Kinect’s primary launch titles, and more significantly, the tech’s first car game. Which means it’s the first game available to convince the gamer market that a motion-controlled driving title is even functionally possible.

And to be fair it basically is. But whether it’s worth the effort it takes to painstakingly work your way through the menu screens just to get to the game is another issue. Kinect has abandoned standard button-clicking for an approach that has you selecting buttons by hovering over them as a bar fills around your cursor. It’s a technically sleek-looking alternative, but it’s the cursor you’ll have to keep an eye on.

It’s slippery, the cursor is, the functional equivalent of drinking soup with a fork. Often it can disappear completely outside the perimeter of your screen. Other times the sensor will prove too sensitive and pick up on every forearm-bob, causing the cursor to jump away from the button you’ve been hovering over. It’s a strange set-up considering other, better, alternatives have already been devised. Kinect’s Dance Central in particular already has a vastly faster menu system that lets you sweep your hand across your body to select an option as opposed to a rather clunky method of keeping as still as possible.

But it’s a struggle to create something that is technically forward-thinking while also being technically possible, and in the case of Joyride the result is a game that at least plays quite well. And that’s because it’s simple. There are only a few game modes, with fairly little variation between them in concept, and this legitimately works in its favour. Joyride gives you five game modes, all of which throw you into a car and tell you to go forward and turn when you need to.

Battle Race is its Mario Kart. Hit crates and you’ll land power-ups that can be used by flicking one of your arms out into the air like a limp pigeon. This will activate it. Some of these power-ups will teleport you ahead of the crowd of cars, while others will freeze the guy behind you, slowing him down.

But the focus of the game is speed. Speeding up, or Boosting as it’s called here, requires you to pull your arms back in a sock-it-to-me motion and then push your arms away from your chest, which hurdles you forward at a ludicrously fast pace. Parts of the track have speed-boosting ramps that help to shoot you off cliffs where you’re asked to perform “stunts” by bending yourself to either side.

These get recycled in three of the remaining four modes. Dash has you progressively boosting your speed as much as possible while avoiding obstacles. Smash mode has you destroying as much as possible within a time limit, meaning Boost is key again. Stunt mode puts you on an enormous half pipe that is riddled with collectable cherries by driving quickly up the ramp, up into the air and turning out stunts. Trick mode is the odd one out, acting as a Kinect interpretation of Simon Says. An on-screen icon will tell you how to contort your body and you follow in suit.

Recycling ideas isn’t necessarily bad design when it works. In fact it’s when Joyride strays from its drive-forward-and-boost formula that things go awry.

Turning is difficult. Turning when you have Boost activated is nigh impossible and simply propels you into walls. But even turning at an average speed causes your car to veer dramatically toward the direction you suggested. Crash into an object and your car will turn around in the wrong direction entirely, forcing you to twist your invisible wheel around to get the car back on track. But without a physical wheel it’s impossible to know how far you’re expected to twist your arms. While the game is very responsive when all you’re doing is weaving left and right between objects, attempting to swing the car around from crash position is a tedious, painstaking experience.

However Joyride is no worse than any launch title to come out of Wii in its earliest year. It sets its aim toward the casual family market and hits it, bull’s-eye. In terms of light-weight casual games it gains points if only for the novelty value of not having a controller, and that’s its niche.

Joyride is no worse than any launch title to come out of Wii in its earliest year.
6 Family-friendly Solid launch title Rubbish menu system Repetitive gameplay