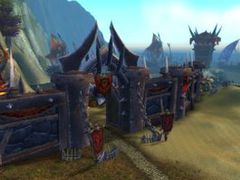 How World of Warcraft will take on 2012

World of Warcraft: Cataclysm’s final content patch is out and upcoming expansion Mists of Pandaria is on the horizon. But how does Blizzard plan to maintain user interest in the period in between expansions? We spoke to lead quest designer Dave Kosak about the road so far and what just might be in store for the future.

Dave Kosak: So far I’m really happy with it. One of our big design experiments with this patch was the Raid Finder option and people are really taking to that. They are really having a good time with it. And the other thing I’ve been really happy with is we’ve added transmogrification in patch 4.3 and the community has really supported that. There’s websites where you can browse all the different types of clothes your character can wear and make a shopping list then go out and explore the content. So I’m really happy with how the community has taken to that. So far great response.

Q: What do you think the most successful aspect is?

DK: Right now? So far for me it seems to be Raid Finder. I know there are a lot of players that really wanted to see that content, and they really wanted to ramp up their character and then have a real challenge of fighting a raid boss but the logistics of getting together with a guild where everyone was available at the same time to raid – not everybody can do that. So Raid Finder opens up a whole lot of content for a whole lot of people and we definitely want to do it with this patch because it’s our most epic raid fight we’ve ever done.

Q: Do you think this patch provides enough content to satiate the users in the period between this and Pandaria?

DK: Well, we’ve announced publicly that we’re trying to speed up our cycle between expansions. So we’re definitely working hard on that right now and I think that between the three excellent dungeons we have, the new raid, and Raid Finder that should give people something to sink their teeth into for a few months.

Q: Have you seen any users actually re-subscribing to test out the new dungeons?

Q: Games like Rift are taking a very workman-like position on churning out new content updates. Do you think you would be interested in coming out with more patch updates more often in a similar vein?

DK: I can tell you with this next expansion we’re definitely looking at ways that we can roll out content in a better pace. Obviously we’re looking closely at what other games have done in the past and what we’re capable of doing in our own teams and trying to multitask and make that happen. Actually we have some pretty cool plans but unfortunately I can’t talk about those! I’m excited because it’s one of the things we’re looking at: how to keep the game really active.

Q: Thrall is a big part of Cataclysm. Do you see him continuing to be a major player in the game?

DK: He’s definitely one of the main characters in Cataclysm, and certainly in many ways Cataclysm is his story. It starts with him setting down the hammer of the war chief of the Horde and passing that to Garrosh. We have a little bit of a love story going on there between both the Shattering and the events in the game in patch 4.2 and then ultimately he’s a pivotal figure in saving the world here. But there’s a lot of characters in World of Warcraft, so I’d like to especially – and this is something we’ve been talking about with our fans – really look at the Alliance characters. Trying to make sure they have a really big story as well. So definitely Cataclysm is really a story arc for Thrall and his story will continue for sure because there’s a lot he’s got to deal with now.

Q: Are there any specific Alliance characters you’d like to take a look at?

DK: Certainly I think Varian Wrynn for the Alliance really needs to be the kind of character that players really look up to and see as a major world figure. And I think if you ask players right now, they don’t quite see him that way yet. So we have a lot of work to do on that character I think. We just haven’t had the opportunity in-game to explore that character the way that we’ve explored Thrall. You know, it’s like Chris Metzen said, Thrall was barely in the game until an event in Burning Crusade where he had a little bit going on. So characters kind of come and go as we shine the spotlight around in different directions I think we definitely want to shine the spotlight on the Alliance in the upcoming expansion.

Q: In terms of the Alliance, the Worgen have gotten mounts. Was there any worry that that would look too comical?

DK: Well, our game has giant cow people and gnomes, rarely do we stop and say “Whoa! Too comical!”. I think we try and just have feature sets that we think players want and that we enjoy. So there was definitely a demand for a Worgen mount. We have a lot of fun with World of Warcraft, we try not to take it too seriously, because we really want it to be a world that’s alive and fun and has a lot of fun to it.

Q: Are you planning on bringing in any smaller patches between now and Pandaria?

DK: There’s not a plan – 4.3 is definitely the climax of Cataclysm so there’s no more Cataclysm content. Traditionally we’ve had a grace period where we patch the game before the expansion comes out and you get sort of mechanical changes before you get the new expansion content. So we’ll have a world event prior to Mists of Pandaria, but that’s mostly a part of Mists of Pandaria’s launch and it’s not really more Cataclysm content.

Q: Do you think that will incentivise users to continue subscribing to WoW between now and then?

DK: What we do is we always look at what’s best for the game. You know, we’re not tracking subscription numbers obsessively, we’re just trying to make the best game we can. We’ve definitely said publicly that we’re trying to roll out content at a faster pace, with a better schedule so players have more to do and it’s certainly something we’re looking at. And we think that’s just good for the game, that’s not a “Oh no we have to do this to keep subscribers!”. It’s a better game, it’s the game we want to play and should have more frequent updates.

Q: Many users sadly unsubscribed to Cataclysm quite quickly. Do you think users will be more satisfied with Pandaria than they were with Cataclysm?

DK: For me Cataclysm, when we talk about the expansion, for me a lot of Cataclysm was the 1-60 re-design which was an epic amount of work. And I think we managed to pull that off in a time frame and we managed to do it and refresh the old world – that was a big part of Cataclysm. We’re really happy with how that turned out!

Check out our World of Warfract Mists of Pandaria artwork gallery