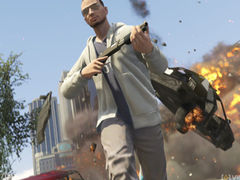 Rockstar is looking into why some players have lost their characters, items and money in GTA Online, and whether it will be able to restore any lost progress.

Multiple users reported their progress as having disappeared over the weekend, to which Rockstar says it is “working diligently to identify and correct the causes for these losses, as well as to establish how best to restore any lost progress and value.”

“We are continuing to investigate the causes of the lost progress and what can be done to minimize the impact until a permanent fix is in place,” the publisher said in an update last night. “Also, we have not forgotten about the requests for restoration. We are in the process of determining the options for addressing the issues for those players who have been affected.”

Rockstar also points out that at times when the game’s Cloud Servers are unavailable, players will be asked whether they wish to play local disc-based content. During this time previous characters will be unavailable and new characters cannot be saved.

“If you want to make sure the characters you create are saved, you should not proceed into GTA Online when the R* Cloud Servers are unavailable,” the publisher warned.

The title update is also expected to have fixed the disappearing cars glitch found in GTA 5’s story mode.