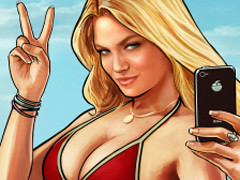 Take-Two CEO Strauss Zelnick has suggested that Rockstar has “a lot of interesting stuff” planned for Grand Theft Auto 5’s DLC, but that it is “way too early” to begin discussing it.

Responding to a question regarding the potential for GTA 5’s ‘digital content’ during Take-Two’s investor call last night, Zelnick said that it was “way too early to discuss those plans, and of course those discussions will come from Rockstar in the normal course”.

He continued: “I think you can safely assume that Rockstar, as the label that led the charge in downloadable content with Grand Theft Auto 4, I think you’d have every reason to believe, purely because of the ground-breaking nature of the title itself and the multiplayer in the title, that there’s going to be a lot of interesting stuff. But I’ll leave that to Rockstar to announce.”

More information on GTA 5 will be revealed next week, although that likely won’t include any of Rockstar’s ongoing DLC plans.

In the same conference call, Take-Two also confirmed that GTA 5 would not be launching until at least April 2013.

The game, which was announced for release during ‘spring 2013’ earlier this week, “is now a fiscal year 14 [title]”, the company’s chief financial officer Lainie Goldstein confirmed. “We’ve announced that it’s during spring 2013 release time period, and not in this fiscal year.”

Zelnick further confirmed GTA 5’s FY 2014 release date, saying: “As a result, we continue to expect to deliver revenue growth and non-GAAP profits for fiscal year 2013 even without a major new release of Grand Theft Auto, and we’re positioned to generate substantial revenue and earnings growth in fiscal 2014.”

He added that the game was Take-Two’s most eagerly anticipated release “without question”.

But why hasn’t Take-Two announced a specific release date for GTA 5? Zelnick explains:

“With regard to the date for Grand Theft Auto 5, spring 2013, we make those announcements based on what we think is best to market the title, and we think that’s the right way to describe it, and we’re thrilled with the way that is shaping up.”