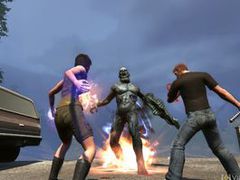 Funcom: Wii U to be first MMO-capable console

Nintendo’s Wii U will be the first console capable of playing MMOs well, according to Funcom’s Joel Bylos.

“Wii U could be the first real console on which running an MMORPG without compromise is plausible.

“The controller is perfect for lining up those rows of hotbars that are essential in most MMOs. A customisable touchscreen interface combined with the 3D spatial movement of a console controller could be a winner.”

While this suggests the studio may see the console as a potential platform for their upcoming MMO The Secret World, creative director Ragnar Tornquist told VideoGamer.com that Funcom has no ambitions to be the first developer to break the console MMO market.

However speaking with Xbox 360 and PlayStation 3 in mind, he leaves room for Wii U, going on to say:

“The secret world was originally also meant to come out on to the Xbox 360.

“We sort of modified our plans a bit based on the fact that console MMOs haven’t really made any huge strides lately. We don’t want to be the first ones to sort of go out there and capture that whole market. But I think Secret World is a game that could do it. It wouldn’t be the same game – there are a lot of things we’re doing in the PC version would be hard to do on an Xbox or PlayStation.”

The Secret World is a place within our world where magic exits,…

The Secret World is a place within our world where magic exits,…