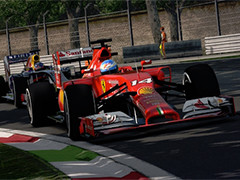 VideoGamer.com has acquired the first screenshots of F1 2014, offering the first glimpse at this year’s game ahead of its official reveal later today.

It was confirmed last night that the first details on F1 2014 would be revealed today, although ongoing rumours point to the game skipping a release on PS4 and Xbox One, instead heading only to Xbox 360, PS3 and PC.

Codemasters has yet to officially confirm which platforms this year’s game will release on, although prior comments have suggested that the developer has been working on a next-gen release.

“Our goal is to achieve the most realistic visuals possible,” Codemasters said last year commenting on next-gen development, “and with the next generation consoles offering us more speed and power, we will be in the best position we have ever been in, which will allow us to achieve the level of realism which will enhance the driving and emotional experience for the F1 player.”