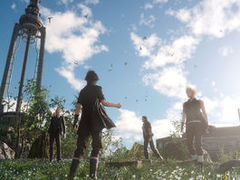 The event, which is being broadcast live on Twitch, YouTube and Xbox One from 3am BST, promises “major announcements and surprises”, including the game’s final release date. Square Enix says that the event will be “worth staying up for”.

Earlier this month, a Gematsu rumour claimed that the game is due to [xurl=/ps4/final_fantasy_15/news/final_fantasy_xv_release_date_rumoured_as_september_30.html]launch worldwide on September 30[/xurl[. But will that turn out to be true? Tune in tonight to find out.