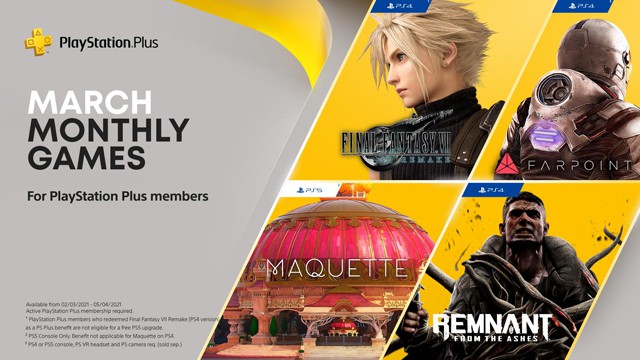 PlayStation has unveiled the next set of games that will be available at no extra cost to subscribers of PlayStation Plus for the month of March, including the timely addition of Final Fantasy VII: Remake.

That'll launch onto the service from March 2, although disappointingly this version won't be eligible for the free PlayStation 5 upgrade to allow you to access the new Final Fantasy VII: Remake Integrade version including a new Yuffie chapter that was revealed during last night's State of Play broadcast.

It'll be joined on PlayStation 5 by recursive puzzler Maquette starring the voices of Bryce Dallas Howard and Seth Gabel, action RPG Remnant: From the Ashes on PS4 and free-roaming first person PSVR title Farpoint. All four games will be available from March 2 until April 5, and last month's freebie Destruction: AllStars will still be available on the service too until the same day when they'll be replaced by Oddworld: Soulstorm and April's other to-be-announced PlayStation Plus offerings.