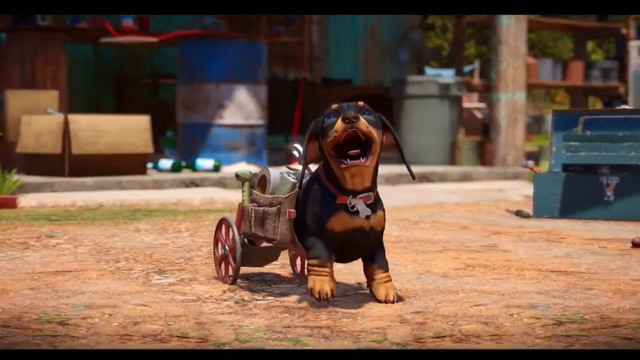 Ubisoft has revealed the first gameplay footage for upcoming ‘guerrilla fantasy’ Far Cry 6, as well as confirming that the game will release this October.

You’ll be playing as Dani Rojas—who you’ll get to pick as male or female at the start—a former Yara soldier who at first has no interest in taking part in the revolution, and would just rather escape their country until they witness first hand the brutality of leader Anton Castillo. Soon enough, you’ll be leading a group of guerrilla fighters and starting a revolution against the leader, meeting up with other characters that include fellow fighters, black market dealers and mentor and inventor Juan Cortez.

We also get a good look at some of the weapons we’ll get to use during your revolution, many of which are repurposed from other objects such as motorcycle engines in miniguns and even, at one point, a gun that fires CDs of 1993 Los Del Rio hit The Macarena. Animal companions make their return too, with an alligator shown and an adorably cute dog that uses wheels to get around.

You can check out both the gameplay trailer and Dani Rojas trailer below as well as the entire broadcast, should you fancy. Far Cry 6 is scheduled for release on Xbox Series X|S, Xbox One, PlayStation 5, PlayStation 4 and PC on October 7, 2021.