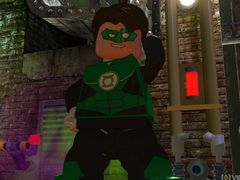 The Avengers Assemble is currently making millions at the box office, but this band of super heroes aren’t the only ones set to cause a stir this summer.

Warner Bros. Interactive Entertainment has supplied us with three exclusive shots from LEGO Batman 2: DC Super Heroes, which show off the king of bling (because he wears a ring), Green Lantern, The Joker and what looks like some puzzle solving.

The game’s coming to pretty much all formats and will be in stores this summer.