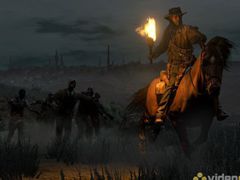 Rockstar has announced that it will host an Undead Nightmare Double XP Halloween Weekend, starting this Friday at 6pm.

The points bonanza will continue until 4:59am on Monday, November 1.

Players can team up with friends for some Zombie-themed Undead Overrun, take down towns in Land Grab or tackle any of the original competitive modes from Red Dead Redemption for a quick XP boost to unlock new mounts, titles, characters and challenges.

Red Dead Redemption Undead Nightmare is out now via Xbox LIVE Marketplace and the PlayStation Store.

Double XP weekends are a good method of boosting player numbers, and in this case convincing Red Dead fans to snap up the new DLC immediately.