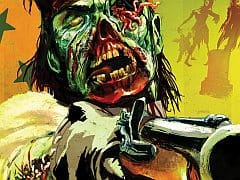 Undead Nightmare is one of those games that, when played in a busy office, can act as a Weapon of Mass Disruption. For starters, there’s the odd spectacle of zombies swarming all over Rockstar San Diego’s carefully constructed Western wilderness, disrupting the cut-scenes and generally making a mess of things. Then there’s the utter racket made by the undead hoards – the wails and howls boxers-browning shrieks that attract people from the adjacent room. The occasional frustrated yell adds to the disturbance, but that’s nothing compared to the excitement that greets the arrival of a rare mythical creature. “WHAT THE ***K IS THAT?! Is it… wait… no! Can I ride it? I can ride it! And it’s on fire!”

Thankfully for the rest of the staff here, I’ve now finished my battle against the plague-ridden denizens of New Austin. The fight took a surprisingly long time to finish, however – far longer than what you might expect from an 800 MS point / £7.99 piece of DLC. Undead Nightmare gives you an awful lot for your money: a new single player campaign that will take five to six hours to wrap up, a quartet of fresh weapons, and a long list side quests and challenges to complete. After you’re done with all this, there’s new multiplayer material to get to grips with: the territory-snatching Land Grab match-type, and a co-op mode called Undead Overrun – essentially a zombie-based variant of Gears of War 2’s Horde, pitching four human survivors against 10 waves of re-animated nasties.

Aside from the volume of additions, the impressive thing about Undead Nightmare is its sheer thoroughness. Rather than going for the easy money, and perhaps just lobbing a few new enemies into the existing framework, Rockstar has opted to completely overhaul the Red Dead experience in fine detail. So alongside the new quests, foes and weapons – the kind of thing you expect from a typical expansion pack – the developers have changed the whole appearance of their world, redressing the land in gloomy hues. There’s a revamped soundtrack too, including a few licensed psychobilly tunes and even new cheeky comments for Marston himself as he loots the bodies of his rotten opposition.

As detailed in the preview we ran earlier this month, Undead Nightmare finds ‘reformed’ outlaw John Marston attempting to stop a mystery plague that’s giving everyone a serious case of the brain-munchies. Right from the word go, when the slimy voice of a Vincent Price sound-alike sets the story in motion, it’s clear that Rockstar is out to have a bit of a laugh. The ensuing story ends up revisiting most of Redemption’s principal cast, and in most cases the accompanying cut-scenes are genuinely laugh out loud funny. In addition to mocking B-movie conventions, this expansion is more than happy to send up the more serious moments of the original game. Racist shopkeeper Herbert Moon, for example, blames the zombie outbreak on a British Catholic homosexual conspiracy.

As amusing as it is to see Rockstar subverting its own hard work, it’s the changes to gameplay that really make Undead Nightmare so refreshing. Long-range gunplay is swapped out for a frantic riff on classic survival horror: ammunition is limited, and your swarming opponents will absorb bullet unless you aim for the head. John’s slow-motion Dead Eye ability becomes an absolute lifesaver, but since your meter invariably depletes before you’ve despatched a fraction of your opponents, most large-scale battles become tense, hard-fought affairs. Of the new weapons, the Blunderbuss stands out as a clear favourite: a slow-firing cannon of explosive, giblet-raining doom. To reload this beast you’ll need to harvest shrapnel from downed zombies – their ribs, ears and tongues – and as I described in the preview, this mechanic ends up having a fairly significant effect on the way you approach each fight.

But as with the vanilla variant of Red Dead Redemption, it’s the array of side quests and challenges that arguably steal the show here. The ambient gameplay challenges remain as slyly addictive as ever, and I’d imagine that a lot of people who will be very pleased to see treasure hunting making a return. There’s no hunting, in pure terms, but the local wildlife have all been transformed into cadaverous equivalents – the undead cougars and zom-bears are particularly mean. Better still, if you may be lucky enough to stumble across a number of mythical creatures. I won’t spoil the surprise outright and say what they are, but suffice it to say that some of them will let you ride across the plains in serious style. There’s also a special cameo appearance from someone who’s been in demand since 2004, in one of the best missions of the whole expansion.

There’s a fine balance required when it comes to zombie games – or at least to games that follow the ‘fast-n-swarmy’ style of living dead. If you make the enemies too easy to kill, the whole thing becomes pointless; make them too tough, and combat can seem too much like hard work. Undead Nightmare negotiates this tightrope fairly well, and while the later battles in the campaign may give some players a hard time, Rockstar wisely wraps things up before things get too ridiculous; if you can handle the bedlam of Left 4 Dead, you shouldn’t find the pace here too strenuous.

Admittedly, the faster, more aggressive pace of the action does occasionally push at the limits of the established controls and infrastructure: John can be a little slow when it comes to clambering over obstacles or up the sides of buildings, and occasionally you may find yourself steeping over a balcony, for example, rather than hauling your ass up to the desired rooftop overhead. If Red Dead had been built from the ground up as a survival horror action game, you’d expect these evasive actions to be a bit swifter and more precise, but under the circumstances they work well enough. Indeed, it’s pretty amazing that the game fares so well at handling a set of demands that differs wildly from its original purpose.

If you we were going to be fussy, you might complain that the one-man-vs-the-masses battles get a little samey, particularly when it comes to clearing towns and settlements of their zombified occupants. Still, these latter battles are essentially optional, and within the mandatory story missions there’s a generous selection of set pieces, with new toys handed over to at sensible intervals. And while I suspect that most people will stick to the single player campaign, the co-op multiplayer game works amazingly well. I’ve always enjoyed game modes that force you to postpone an inevitable death as long as you can, and here Rockstar have found a winning formula. Even when you’re playing with random strangers, it’s all too easy for spontaneous bonds to form as players risk their necks to save each other. It’s also pleasingly easy for a match to slip out of control, especially when people start lobbing dynamite around.

Aside from the minor issues that I’ve mentioned, the only real complaint I can level at Undead Nightmare is that it makes the previous two DLC packs – which were on sale at the same price – look a little bit lightweight. There’s a huge amount of content here, and while I rushed through it in about six hours, it’ll take you far longer than that to see and do everything. This is a gold standard expansion, one that’s briefer than the GTA IV add-ons, but otherwise just as good. In a happier world, all DLC would give you this much to play with.

Red Dead Redemption: Undead Nightmare is available now on PSN and Xbox LIVE. The expansion will also be released on disc, along with all the previous DLC packs, on November 26.

This is a gold standard expansion, one that's briefer than the GTA IV add-ons, but otherwise just as good.
9 Genuinely funny Loads of content A departure from the main game Controls occasionally suffer under stress