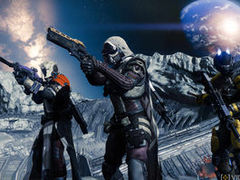 Destiny beta coming to Xbox One & Xbox 360 in late July

UPDATE: Microsoft has confirmed that the Destiny beta “will be landing on Xbox One and Xbox 360 in late-July for fans that pre-order the game”. More details about the beta will be revealed “soon”.

ORIGINAL REPORT: Destiny’s closed beta will land on Xbox One and Xbox 360 in “late July”, a trailer for the game has confirmed.

The date suggests that the beta will arrive on Xbox platforms 1-2 weeks after it hits PS3 and PS4 on July 17.

To access the beta you’ll need to pre-order the game and register the code supplied by participating retailers.

Destiny releases on Xbox One, Xbox 360, PS4 and PS3 on September 9 alongside a fancy new white PS4.