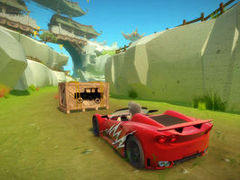 Kinect for Xbox 360 racing game Joy Ride is getting an XBLA sequel, without Kinect-only controls. The original game was announced as a free-to-play downloadable title, before becoming a full retail release that required Kinect.

Turbo, which will include Battle Race, Pro Race, and Time Trial modes, is reportedly due for release in just a few weeks.

Kinect Joy Ride earned an OK, but rather disappointing 6/10 on its release in 2010.