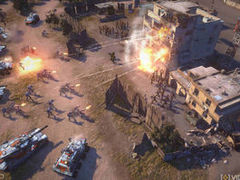 Despite being canned and the developer closed, EA’s free-to-play Command & Conquer may not be as dead as previously thought, with development on the title set to resume under a new studio.

In an update on EA’s support website, the publisher revealed that it would be offering The C&C Ultimate Collection customers early access to a new beta “once production of [Command & Conquer] resumes under a new studio”.

Victory Games announced that the game had been cancelled and the studio closed last month, stating that negative feedback had led to the project’s termination.

“Your feedback from the alpha trial is clear: We are not making the game you want to play,” said Victory. “That is why, after much difficult deliberation, we have decided to cease production of this version of the game. Although we deeply respect the great work done by our talented team, ultimately it’s about getting you the game you expect and deserve.”

At the time, the studio added that it had “already begun looking at a number of alternatives to get the game back on track.”

It’s possible, of course, that the game could return as Command & Conquer: Generals 2, the non-F2P title it was originally expected to be. Or it could come back as a sequel to Command & Conquer 4. Which would you prefer…?

In Command & Conquer Generals 2, world leaders are mere seconds away…

In Command & Conquer Generals 2, world leaders are mere seconds away…