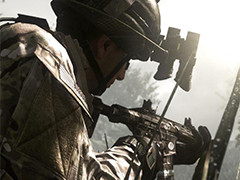 Call of Duty: Ghosts is 60FPS on Xbox One, next-gen engine tech detailed

Infinity Ward has provided the first details on Call of Duty: Ghosts’ next-gen engine and confirmed that the upcoming shooter will run at 60FPS on Xbox One.

Speaking to VideoGamer.com last week, Activision’s VP of Production Daniel Suarez said that this year’s COD will be “the most beautiful Call of Duty game we’ve ever made”, with the technology offered by next-generation consoles allowing for a more “immersive” and “realistic” experience.

But Suarez admits that developing Ghosts for next-gen consoles has been challenge.

“Trying to do as much as we can with a system that is being developed as it’s being developed [is the biggest challenge],” he continues. “I think that’s a challenge we have any time we do a console transition. The system is still being finalised, and you have an expectation of what those systems can do, and you’re constantly pushing for those systems to do as much as possible, but it won’t be until we get much closer [to launch] to know, yes, this is how the game is going to perfectly run on this system.

“We’re pushing graphics, we’re pushing geometry, we’re pushing particle effects and lighting, we’re making bets on things that will be able to perform at 60FPS by throwing as much as we can at it. And what ultimately happens is you’re going to get to the point where hardware is finalised, and you either need to add more or pull back. Those are the things that really are the challenges: getting it to where it needs to be.”

But has sticking to 60FPS hurt Infinity Ward’s ability to push the visuals on next-gen consoles?

“No,” Suarez tells us. “It’s what our foundation is built on. It’s not hurting us in any way.”

In fact, Suarez claims that Infinity Ward is doing all it can to push the game’s tech in time for launch.

“[A journalist asked me earlier], ‘Are you doing everything you can?’ And I said, well, for this launch, yes, because you’re trying to do everything you can but you’re never optimised as you go along,” he continued.

“Look at where we are right now on the life cycle of 360. Call of Duty has never looked better on 360 as it does now. That’s because we’ve been able to optimise [and] become more efficient in the development of the game and the systems that support it. As we’re moving now to that next generation, the things we’re throwing in there, some of them are very efficient, but we’re going to learn a few things a lot better, so over the course of that generation, things are going to look better than they did [at launch].”

The Xbox xx version of Call of Duty: Ghosts was revealed during Microsoft’s Xbox Reveal event earlier this evening. But how will the experience differ to the current gen versions? Suarez explains:

“I want to be able to have experiences on Call of Duty that feel visually heightened. One of the things that Call of Duty has always done has delivered that Michael Bay moment: that roller coaster ride, adrenalin rush experience. But if you play it now on next-gen, it’s so much more immersive because it feels so much more real: the visuals; the particle effects of water, explosions, smoke, debris; as things blow up, the amount of stuff falling around you becomes that much more immersive.

“It’s just all these things that we’re able to leverage on the technology that’s going to raise that heightened awareness of the game.”