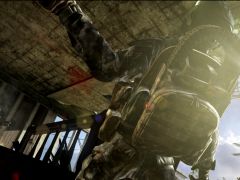 On PS4 and Xbox One it may be, but Ghosts is a current-generation game. In fact, it’s the current-gen game, the one that defined systems and mechanics that changed the industry. They remain enjoyable; the question is whether that’s still enough.

On the battlefield, play is more focused on gun-on-gun than aerial bombardment, and the game is better for it. Few of the maps seem conducive to sitting off and calling in strikes: players are funneled into buildings and tight corners with a regularity that makes one-on-one the focus. Sniping is possible: there’s a new marksman rifle class, and Warhawk and Stonehaven in particular pay dividends to diligent distance players. But the frustration of being constantly blitzed from above is gone.

It puts the focus on your loadout and guns, and the new perk system is nicely organised. They’re now broken down into specific categories (such as speed, equipment etc), with each assigned a ‘cost’ to equip, like with Pick 10. Perks – and their classes – seem flexible enough to accommodate most builds.

Flexibility is also encouraged elsewhere, with one example being a sight that can be changed from thermal vision to iron sights with the click of a stick. It’s a small part of a system that seems to encourage players to be more rounded: it’s possible to play with all speed perks if that suits, but with thermal, tracker and variable equipment – as well as perks designed to counter ‘pure’ players – variety is key.

With regards to maps, few are duffers, but then again few really stand out. It’s a shame, as the gameplay itself seems more refined and enjoyable than Black Ops 2, especially new modes Blitz and Search and Rescue.

Outside of multiplayer, the campaign is a po-faced, nonsensical rehash of greatest hits long past. Extinction (Left 4 Dead meets Zombies) is a lot of fun, and Squads feels like a well-marketed shell for Black Ops’ Combat Training mode.

Multiplayer is still the star then, but it’s diminishing with every return, its addictiveness tempered by over-familiarity.

Diminishing with every return, Ghosts' addictive nature is tempered by over-familiarity.
7 Extinction mode is good, if limited. Less emphasis on aerial bombardment. Single-player is terrible. Returns are diminishing.