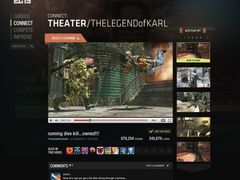 Call of Duty Elite detailed; what’s in the package?

The rumours are true: Activision’s Beachhead Studios has spent the last two years working on Elite, an integrated online platform for all upcoming Call of Duty games.

Modern Warfare 3 will launch on November 8 with full support for Elite, which itself will include a premium subscription option for dedicated fans.

Premium subscriptions will allow users access to Call of Duty DLC as and when it’s released – though map packs will still be available in their traditional retail fashion – and Beachhead Studios is also teasing exclusive Call of Duty content for Elite subscribers, opening the door for the possibility of things like custom weapon skins and even Elite-only Spec Ops levels in Modern Warfare 3.

Pricing details won’t be announced until later in the summer, but Activision assures us an Elite subscription will cost less than any comparable service. Seeing as subscribers get the map packs included for free, and on average you’ll see about three map packs for a Call of Duty game, I personally expect the price to be at least £40 a year.

Call of Duty: Elite will also include support for Black Ops, which is currently how the service is being demonstrated.

A closed beta will be launching this summer with Black Ops support, and interested users will be able to enrol via e-mail in the next few months.

While it would not be impossible to retroactively implement Elite into Modern Warfare 2, it is unlikely and would require considerable extra work – Beachhead was already working with Treyarch during development of Black Ops, hence the support.

The current Call of Duty: Elite website – still in beta – looks slick and impressive. The aesthetic is slim grey lines and deep textured blacks, with a clean and modern web interface displaying reams of pertinent information both elegantly and without confusion.

There’s clear inspiration from Halo’s impressive statistic tracking, but Elite goes even further: users can view individual heat maps for every game played, for instance, but each has its own scrollable timeline that can detail both individual and cumulative kills and deaths.

I’d say it’s both more functional and more attractive than current Bungie.net stat tracking too, and Elite offers an additional feature by allowing you to join and create groups that have their own individual leaderboards and statistics.

You could join groups for London or Manchester, for instance, and see where you stack up compared to other locals. Or you could join a group for VideoGamer.com, perhaps, and wallow in self-pity after basking in my impressive records. I heartily recommend the latter.

Basic statistic tracking and group functionality is provided free for all users. Basically, if Bungie.net does it for free then Call of Duty: Elite will also do it for free.

Subscribers, however, will get access to leagues, tournaments, and competitions alongside fully-fledged clan support.

Competitions will be frequent and come with real prizes attached, according to Activision, with both iPads and Microsoft Points being mentioned.

Also provided is a learning resource for players, with detailed map and weapon guides produced by top-tier players. Elite will integrate your personal statistics into these tutorial sections, allowing you to chart incremental improvements and areas of weakness directly alongside the guides themselves.

The service will also launch with dedicated mobile applications – an iPhone app is being demonstrated – and will fully blend into Modern Warfare 3 itself when the game is released in November.

I want to know more about the pricing before I’m ready to commit, but I’m impressed from what I’ve seen so far. If it doesn’t cost too much, I could definitely see myself subscribing.

VideoGamer.com saw Modern Warfare 3 in action last week and has detailed the Manhattan level and the London underground tube chase.