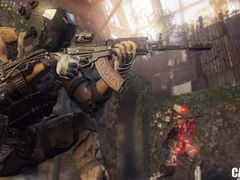 Pre-orders for Call of Duty: Black Ops 3 are “significantly” higher than those for last year’s Call of Duty: Advanced Warfare, Activision has revealed.

Speaking during last night’s earnings call, Eric Hirshberg, president and CEO, explained why the publisher is so confident about the game’s imminent launch.

“We couldn’t be more excited about the launch this Friday,” said Hirshberg. “We have strong momentum indicated by a number of factors, but just to name a few: the growing engagement around the past Black Ops titles; the significant year-on-year lift in pre-orders; consumer sentiment around our marketing assets which is more positive for Black Ops III than any Call of Duty title on record; a great partnership with Sony across consumer, trade and custom PS4 bundles; and our ranking as Neilson’s Number One Most Anticipated Title of the Year.”

He then offered his personal opinion on the title, stating that it is “simply awesome”.