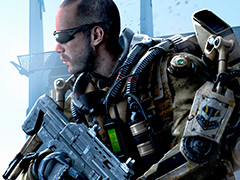 Call of Duty: Advanced Warfare’s fourth and final map pack, Reckoning, will release on Xbox One and Xbox 360 next Tuesday, August 4, Activision has announced.

As usual, Reckoning will include four new maps – Overload, Quarantine, Fracture and Swarm – plus the final episode of Advanced Warfare’s Zombies saga. A new Trident Reflected Energy Weapon is thrown in as well.

While a date for other platforms has yet to be announced, expect Reckoning to arrive on PS4, PS3 and PC in early September.

“What an amazing journey this has been,” said Sledgehammer co-founder Glen Schofield. “From the moment we began with prototyping Advanced Warfare all the way to the completion of our fourth DLC pack, Reckoning, it’s been an incredible experience. We’ve often said we have the best fans in the world and we mean it.  We look forward to continuing to support our fans.”