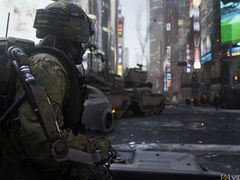 The footage was broadcast live on Twitch yesterday afternoon after one PS4 user managed to snag themselves an early copy. The footage revealed brand new details on next week’s shooter, including a new paintball toggle and a 30 kill streak ‘DNA Bomb’.

“Stealing and releasing is not the answer,” he told a fan suggesting that the leak had given fans more information about the game.

“It is a big deal to us because discovery while playing is part of the fun. It will all be good, just saying.”