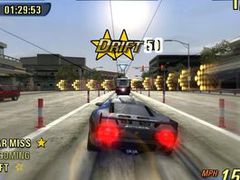 Burnout’s spiritual successor will be based on Burnout 3

The spiritual successor to Burnout currently being developed by former Criterion devs at Three Fields Entertainment will be based on Burnout 3: Takedown, the studio has revealed.

Taking to Twitter, the studio revealed that the unannounced racer – which the developer is referring to as ‘Shiny Red Something’ – “will be the spiritual successor to ‘the third one'”.

Three Fields approached Twitter users for their opinion on which game in the series the upcoming game should be based on last week, asking them whether they’d prefer to see it inspired by “the second, the third or the fourth one”.

The decision to base it on Burnout 3, however, should mean that the developer is abandoning the open-world structure established by the latest title Burnout Paradise, returning to the closed circuits of the earlier games in the series.

The game is due to be developed on PS4, Xbox One and PC, and will possibly support VR headsets PlayStation VR and Oculus Rift. A release window, however, has yet to be confirmed.