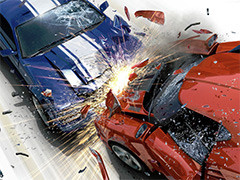 Updated on September 29, 2015 by David Scammell

Criterion has suggested that it isn’t working on a Burnout HD Collection for PS4 and Xbox One, telling fans that it is focusing on “newer, even better things”.

Responding to a message on Twitter asking about the possibility of a collection, the studio laughed, saying: “Hah! You’re not the first with that one. Nice idea but it’s still not true. We’ve moved on to newer, even better things.”

Another user then follows up to ask if Criterion could create “just Burnout 3 HD? Its gotta be easy right? Just push a button and it’s done i reckon.”

“Making the button is the tricky bit, though,” the developer responded.

A PS4 and Xbox One port of Burnout Paradise isn’t on the cards, either, Criterion confirmed, although it does hope to get the Xbox 360 version running on Xbox One via backwards compatibility.

Fans have long requested an HD collection of the original PS2 and Xbox Burnout titles. But rather than return to the driving series for its next game, the developer is instead focusing its efforts on a new first-person extreme sports title revealed at last year’s E3.

A release date for the game has yet to be confirmed.