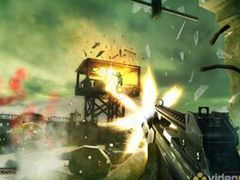 Fancy being able to try out Bodycount before you slap down your hard-earned cash? You’re in luck: Codemasters is working on a demo.

Speaking to VideoGamer.com in Dubai, Codemasters’ Andy Wilson revealed that a Bodycount demo is on the way. “Definitely, we’re planning to do one,” he said.

Why’s that? “The reason is, there’s a real sea-change between people seeing it, and playing it. When people play it, they seem to really get on with it, so we want to put it in as many hands as possible, so that people understand – not just what it’s about – but we have actually created quite a refined experience when it comes to weapon handling and cover lean and all that sort of stuff.”

Does Wilson think developers should be placing more emphasis on things like demos and betas in general? “It depends what your game is. If you’ve got one very small trick, and you give it away – you might really get a lot of people going ‘ah, that’s fun – but I’m not going to buy it.’ It can do as much damage as good sometime. But if you’ve got a good game, and you’ve got confidence in it, then there’s no harm in actually putting it out there. Because people are going to want good games.”

There are currently no details as to when to expect the Bodycount demo.

For more information on the game, check out my recent Bodycount preview.

Bodycount is due for release this summer for Xbox 360 and PlayStation 3.