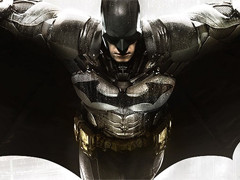 Batman: Arkham Knight is not in development for Xbox 360 or PlayStation 3, Rocksteady has confirmed, telling Game Informer that going next-gen only allowed it to be “more ambitious with the design and make a real, genuine next-gen game”.

“It’s not a challenge to move to next-gen,” explained game director Sefton Hill. “The real challenge is making sure you’re getting the best out of the machines. It’s easy to get the game running, but it’s about, ‘What can we do that really pushes those machines?’ Obviously you see a lot of games that are cross-gen, and they feel a bit reined in because of that. Because we were able to make that decision quite early, we were able to be more ambitious with the design and make a real, genuine next-gen game.”

Despite the game being exclusive to PS4, Xbox One and PC, though, Arkham Knight doesn’t appear to be making use of Epic’s next-gen engine Unreal Engine 4.

Instead, it’s being built on a “juiced-up version of Rocksteady’s custom modified Unreal engine”, suggesting that the game may be sticking with the earlier games’ Unreal Engine 3.

Nevertheless, the game still appears to be pushing the power of next-gen consoles, with a single character used within the game’s cinematics rendered with a similar polygon count to that of Arkham Asylum’s entire environment.

The Batmobile itself uses 160MB of memory, too, thanks to its “very expensive shaders and textures” and the “hundreds of thousands of polygons” used to build it. The world of Gotham City is said to be five times larger than that of Arkham City, too.

“Our lead engine coder was saying the other day that, when you switch to next-gen only, rather than saying ‘no’ to our artists and designers a lot he can now just say ‘yes’,” studio director Jamie Walker added. “That’s what the horsepower of next-gen enables us to do.”

Batman: Arkham Knight launches on Xbox One, PS4 and PC later this year.