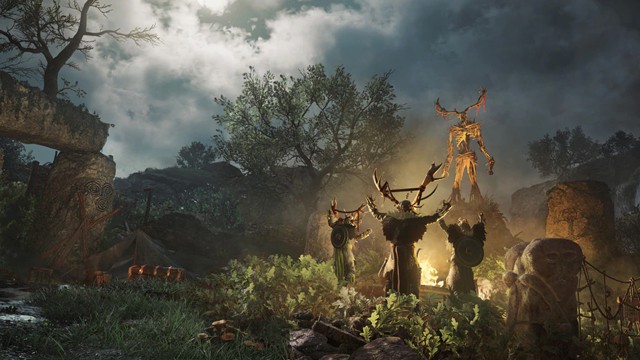 Ubisoft has released a new trailer and some further insight into the Wrath of the Druids expansion releasing tomorrow for Viking adventure Assassin’s Creed Valhalla.

Based on the folklore and history of ninth-century Ireland, the DLC will grant Eivor new abilities such as smoke bomb arrows and even the ability to summon Irish hounds that can attack enemies. Sickles are a new weapon type in this add-on too, and you’ll also be tasked with setting up trading posts to foster alliances between the settlements of Ireland and your home back in Ravensthorpe, England.

Naturally, there’s plenty of real world history figureheads given an Asssassin’s Creed twist in the pack, including Barid mac Imair—who, in the world of AC, is both Eivor’s cousin and the king of Dublin—Ivar the Boneless and Sichfrith mac Imair, whom you can read up more about and their real-life counterparts in the post on the Assassin’s Creed blog.

You can check out the trailer for the DLC below, and Wrath of the Druids is available either on its own or as part of the game’s season pass from tomorrow in Assassin’s Creed Valhalla on Xbox Series X|S, Xbox One, PlayStation 5, PlayStation 4 and PC.