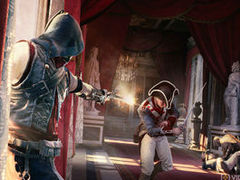 Assassin’s Creed Unity will run at 900p/30fps on both PlayStation 4 and Xbox One, Ubisoft has confirmed, with the publisher opting to aim for platform parity to avoid discussion over any differences in performance.

“We decided to lock them at the same specs to avoid all the debates and stuff,” senior producer Vincent Pontbriand told VideoGamer.com while explaining that it’s the consoles’ CPUs – not the GPU – that prevents Ubisoft Montreal from improving the game’s performance.

“Technically we’re CPU-bound,” he said. “The GPUs are really powerful, obviously the graphics look pretty good, but it’s the CPU [that] has to process the AI, the number of NPCs we have on screen, all these systems running in parallel.

“We were quickly bottlenecked by that and it was a bit frustrating, because we thought that this was going to be a tenfold improvement over everything AI-wise, and we realised it was going to be pretty hard. It’s not the number of polygons that affect the framerate. We could be running at 100fps if it was just graphics, but because of AI, we’re still limited to 30 frames per second.”

Last year’s Assassin’s Creed 4: Black Flag also shipped at 900p/30fps on both PS4 and Xbox One. A post-release patch, however, bumped the PS4 version to 1080p. Ubisoft has given no indication that it has plans to do the same for Unity.

Assassin’s Creed Unity launches on PS4, Xbox One and PC on November 14.

UPDATE: Ubisoft has released a statement claiming that it “did not lower the specs for Assassin’s Creed Unity to account for any one system over the other”.

“We understand how Senior Producer Vincent Pontbriand’s quotes have been misinterpreted,” Ubisoft said in a statement provided to Kotaku. “To set the record straight, we did not lower the specs for Assassin’s Creed Unity to account for any one system over the other.

“Assassin’s Creed Unity has been engineered from the ground up for next-generation consoles. Over the past 4 years, we have created Assassin’s Creed Unity to attain the tremendous level of quality we have now achieved on Xbox One, PlayStation 4 and PC. It’s a process of building up toward our goals, not scaling down, and we’re proud to say that we have reached those goals on all SKUs.

“At no point did we decide to reduce the ambitions of any SKU. All benefited from the full dedication of all of our available optimization resources to help them reach the level of quality we have today with the core Assassin’s Creed Unity experience.”