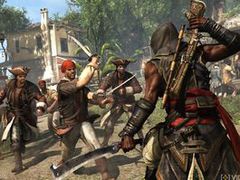 Ubisoft has announced Assassin’s Creed 4: Black Flag Jackdaw Edition, an Amazon-exclusive re-release of last year’s hit open-worlder containing a copy of the full game and every piece of DLC.

Available from March 28 for £59.99, the Jackdaw Edition contains all six multiplayer add-ons and single-player expansion Freedom Cry, and is exclusive to PlayStation 4 and Xbox One.

However, it doesn’t appear to offer anything in the way of a saving over buying the content separately, with Amazon currently asking for £44 for the standard edition and the Season Pass available for £15.99.

Still, if you want it all wrapped up in a single box, head through to Amazon to check it out.