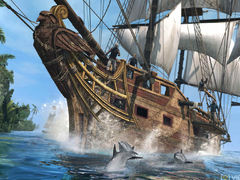 Assassin’s Creed 4 delayed on Wii U

The PC and Wii U versions of Assassin’s Creed 4: Black Flag will now release alongside versions for Xbox One and PS4 on November 22, Ubisoft has announced.

This is anther blow for Wii U gamers who are being made to wait an extra three weeks over the November 1 release for versions on Xbox 360 and PS3. Ubisoft had already said that the PC version would ship a few weeks after the current-gen editions.

The November 22 date also means the PS4 edition of Assassin’s Creed 4 arrives in stores one week before the console to play it on is released.

Check out the all-new Pirate Heist Trailer below.