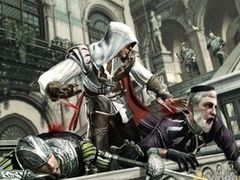 Ubisoft has announced that Assassin’s Creed II, released in November 2009 for Xbox 360 and PS3, has now sold over six million units worldwide. The figure represents actual sales to gamers. Additionally, the publisher expects to reach nine million units sold to retailers by the end of March 2010.

Sales of the game are said to be 40 per cent higher than its predecessor and Ubisoft has already revealed that a third game in the series will out before the end of March 2011.