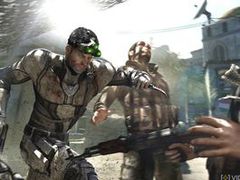 Prior to Amazon’s listing, the game had only been stamped with an official ‘spring 2013’ release date by publisher Ubisoft.

The updated release date appears to have occurred alongside a revision to the game’s product description.

The Limited Edition contains an A2 map of the game’s conflict zone, plus bonus digital content, including an Upper Echelon suit containing “five armour pieces with a unique visual and damage protection bonus”, special goggles, and a bonus mission, all housed inside an exclusive steelbook.

According to the description, the goggles also shine gold. Snazzy.

Splinter Cell: Blacklist has been confirmed for release on Xbox 360, PlayStation 3 and PC. A Wii U version is also rumoured to be in development.