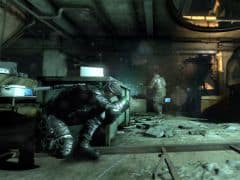 If you were unsure about Splinter Cell: Conviction, I cannot begin to fathom what your thoughts towards Blacklist will be. The more open-minded will certainly be entertained, but anyone who disliked the shift away from all-out stealth may be about to explode.

That’s not to say what’s here isn’t, mostly, an ‘in the shadows’ experience – it is; Ubisoft has looked to the likes of Chaos Theory to recapture the magic. A firefight – while a viable option – is never an easy alternative, or as satisfying as remaining silent, and areas where you have to remain undetected without even engaging an enemy are a test.

Call of Duty’s influence is hard to miss, though. Modern Warfare’s ‘Death From Above’ is copied almost verbatim, and at one point you dive into a spot of first-person shooting. There’s even an enjoyable persistent upgrade system that rewards cash for pimping out Sam’s plane, gadgets and loadouts. Given how some questioned Conviction’s ‘mark & execute’ and ‘snap to cover’ mechanics – which return – the choice to vary the template further could be too much.

None of the above are bad additions, however, unlike the decision to rework Sam Fisher. Along with the narrative, he’s devoid of any sense of humour. He’s boring. Sam may now be in charge, but it doesn’t mean everything has to be so po-faced. That the story comes straight from the generic playbook just makes it more forgettable.

It’s not all single-player, of course. From the start, everything is controlled through the SMI (massive computer) instead of separate menus: the option to play co-op/Spies vs Mercs, or dip into Blacklist’s bizarre map-exploring meta-game is always there. It’s very well done and, more importantly, is the gateway into the excellent online offering, which is as good as it ever was.

Purists may struggle with Blacklist simply due to how it toys with stealth. Given that it’s still the game’s core, and that its suite of modes, especially online, are damn entertaining, though, mean it’s a solid finale to this generation’s Splinter Cell.

Splinter Cell: Blacklist may not be for those who want a purer Sam Fisher experience, but it's still very good.
8 When it is stealthy, it's great Multiplayer is brilliant Fiddly controls on occasion Changing template will annoy some