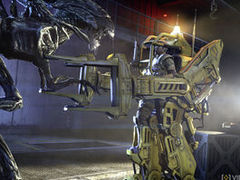 Gearbox CEO Randy Pitchford believes that Alien 3 will become a better film after the studio’s game, Aliens: Colonial Marines, hits stores. The game connects things up, clearing up inconsistencies in the film.

“After this game, Alien 3 is a better film,” Randy Pitchford told Joystiq. “I think [Alien 3] is a great film, but I think that when we came off of Aliens, some of us wanted something different. Also, there were some weird things that we didn’t quite make sense of. Inconsistencies with the canon that were created. And it turns out that they’re not inconsistencies – there are reasons for things. And we get to be the ones that get to connect all that up and make it clear […] The fact that we can do it in video game form is just amazing.”

Aliens: Colonial Marines is due for release on Xbox 360, PS3 and PC later this year. A Wii U version is also in development.

Alien 3 isn’t the worst Alien film, but that’s purely down to the fact that Resurrection and the two AVP films are awful. If Colonial Marines can make the film better, that’s great, but I’m not holding my breath.