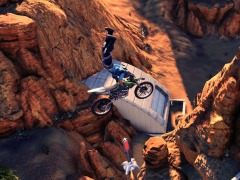 – On Park and Ride, land on the tennis court and reverse into the warp zone to play a match against a penguin.

– In Stormtrooper, reverse near the start of the level into the bright portal to play Trials’ interpretation of Angry Birds.

– On Cliffhanger, reverse into what looks like a missile silo to play a first-person 3D maze.

– At the start of Observatory, drop down to the burst pipe spitting fire to ignite your bike and fly through a series of fire rings. The last ring should guide you towards a glider with a portal to end the level.

– Around the Oasis also has a wormhole wedged between two huge pipes that leads to a Marble Madness-style mini-game.

– In Fusion Factory, miss the jump into the blue loop at the beginning of the level and you’ll find a portal leading to an incredibly hard level.

– Drop down onto the rock after the yacht in Marina Mania to find another portal which takes you to another challenging level.

– Set of the rocket right at the start of Greater Crater, then drop down where it lands and reverse to find a portal.