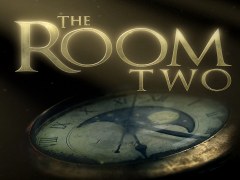 Zoom in on the ship. On the right-hand mast, double tap the crow’s nest (the circular area near the top with the triangular pattern) and then rotate the top and bottom until a rope pattern is revealed to receive a small gold key.

Double tap the ship and move the two cannons on the ship’s bay to reveal a key slot along its side. Use the key you just received and the rear half of the ship will open. Pull open the rear and take the strange shaped key. Move the left half of the ruby to the centre to reveal a chest to the left of the room you’re in.

On the right side of the chest, lift up the handle to reveal a strange cylinder. Examine the cylinder in your inventory, pull up the silver handles to turn the cylinder into a crank.

On the pillar behind the chest are two golden symbols that can be rotated, move them to receive a small gold key.

Move to the the centre of the chest and pull apart the lock to reveal a series of rotatable objects with a keyhole in the centre. You must manipulate these so that the strange key fits. The right lock should have the bottom left trio of triangles filled in, the left one should be bottom right and the bottom one should have the top triangle filled in, then the key will fit.

Open the chest and slide the small golden lock in the top right. Use the eyepiece to reveal a rotatable lock. Slide the two gold bars out, rotate the piece until the other two gold bars fall in.

There is another translucent green square on the left of the box. Use the eyepiece again and spin the lock 180 degrees.

On the lid of the box is a third translucent square. Do the same thing again by moving the locks to free up the gold bars. This will reveal the final gold switch on the bottom right circle in the box. Move this to unlock the green translucent panel in the lower right hand corner. Zoom into the panel and activate the eye glass. Move the revealed lock pieces to reveal the lock in the centre.

Use the crank in your inventory and rotate counter clockwise, open the lid to reveal an explorer’s map. You must guide the ship to its destination using the hints on the text to the left. First, move the ship up two squares, left two and down three by tapping out the route on the map. Then press the gold square in the bottom right to send the boat on its way.

This will reveal a lock below the text, you must slide the gold triangular pieces so that they fit the lock. The silver areas are the free space you can move into, just keep moving until it fits. Use the gold key.

Next, move left four, up four then left two, clicking the gold square again. Use the eyepiece on the final sheet of paper. Rotate the wheel of the ship to the right and match the compass symbols together. Remove the eyepiece.

Finally, move six down, right two and up one, then press the gold button, to receive a painted figurehead.

Zoom into the very front of the boat, and place the figurehead there to get the wheel. Place the wheel in the cog on the stern and rotate counter clockwise. The camera will pan to the bottom of the ship, slide the peg and lower the mast.

Move the second wheel that gets revealed, then input the code on the plaque “ROSE” and take the gem. Place the gem on the second half of the slots in the middle of the ship and slide it to the middle to reveal a third area.

There are for square gold plates with triangles around the third weight, rotate these to unlock a drawer on the far left of this box. The points of all four triangles should be facing away from the hole left by the weight for the drawer to open. Move to the drawer, open it and take the small disc from the drawer.

Examine the third weight and rotate the top of it to change its shape, place it on the scales. The slot for the third disc will open up, and you must fill the slots once again. Take the fourth weight. Examine it and slide the four white pieces up.

Rotate the hole left by the weight so the white arrows align. Take the fourth disc. Place the weight on the scales and put the disc in the fourth slot. Fit the pieces into the disc and the fourth weight will appear.

Examine the fourth weight and rotate the handle. Place the two final pieces you receive onto the scales. Take the small anchor and metal clock spring. Place the anchor on the metal hooks on the right hand of the ship. Take the metal star.

Back on the table, place the metal star into the slot on the box and rotate 180 degrees. Open the lid and slide the gold square found on the rim to the left. Take the winding key.

On the right and side of the box, pull the two metal corner pieces down to reveal the screwdriver.

Slide the cog in the lower right of the top of the box to flip the clock over. Unlock the lid by sliding the lock found on the left. Use the screwdriver to remove the silver screw. Place the metal clockspring inside and put the winding key in the hole on the right. Wind the clock and the whole thing will reform itself.

Set the time on the clock to 2:50. Press the two square buttons to free the key. Use the key on the lid of the box. Use your eyepiece on the green circle and rotate until the image makes a ship. Take the diamond shaped metal casting. Place it in the centre of the table, rotate the block to match the red scribbles to once again use your eyepiece to unlock the exit.