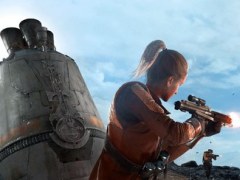 Star Wars Battlefront stands to be one of this holiday’s biggest releases. With the launch of the much-anticipated Episode VII: The Force Awakens, the game will enjoy a huge resurgence in Star Wars fanboyism as players look to enjoy battles across maps from the original trilogy.

DICE, developers of the Battlefield series, have tried to recreate the sense of epic Star Wars encounters in iconic locations such as Hoth and Tattooine. Taking part in up to 40-player battles means we can expect some intense shoot-outs, with some Tie Fighters and X-Wings thrown in for good measure. Players will also get the chance to play as recognisable heroes from the movies, such as Luke Skywalker, Darth Vader and Bobba Fett.

Get ahead of the game by taking part in the Star Wars: Battlefront beta from October 8 until October 12, and then transfer your newfound skills to the final game which launches November 19 on PS4, Xbox One and PC.