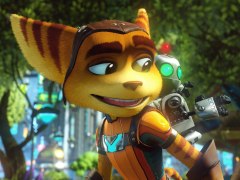 Ratchet and Clank on PS4 has a lot of collectible items. Holocards can be collected to give you perks, such as increased raritanium drops, but special RYNO Holocards can be traded in for the amazing RYNO gun. There are nine of these to collect, some requiring you win hoverboard races, some hidden behind Trespasser puzzles and others just plain hidden. We’ve got the complete guide on how to find them all and how to make the gun even better once you’ve got it.

This is incredibly easy to find as it’s through a door right next to the RYNO vendor himself. You more or less have to pick this up on your first run through. The vendor gives you the Trespasser, which you then use to shut down the forcefield blocking your path to the RYNO Holocard. Easy.

Rather than having to hunt this RYNO Holocard down, you earn it by winning the Gold Cup hoverboard race. Make sure you pass through boost rings as you go and you should be able to win the bronze, silver and gold cups without too much difficulty. The hoverboard racing might not be the best part of the game, but it’s essential you get good if you’re going to 100% the game.

You may have noticed this RYNO Holocard on your first time through, but were unable to access it due to a forcefield. Now you’ve got the Trespasser, head back to Kerwan and then take the hover taxi to Downtown Aleero City. Follow the path round to the location marked on the map.

Activate your Trespasser on the terminal and complete the puzzle (it’s not hard, but the solution is here for you if you get stuck). Walk through the open door and collect the Zodiac RYNO Holocard.

On travelling to Nebula G34, simply walk down the main internal route until you come across a forcefield. This is another Trespasser puzzle, so activate your device on the terminal to open the laser puzzle.

This puzzle is incredibly simple, but the solution is here for you. Once solved you can walk into the open room and collect the RY3NO Holocard.

If you’ve already found the early gold bolt on Batalia you may well have seen the locked door that’s part of the same building. Right near the start of the area there’s a forcefield and Trespasser puzzle.

Solve the puzzle (solution provided if you’re stuck), and the RYNO IV Holocard is yours to collect.

Inside the factory (you can teleport there from next to Ratchet’s ship if you’re returning to this area) you’ll find the RYNO V Holocard behind a green circular door on the southern side of the map. Make sure you clear out enemies from this area before you try to get the RYNO V Holocard as there are a lot of foes trying to take you out. Once the area is safe, head to the lower portion of the map and locate the green door and the gun turret next to it. Blow up the door using the turret and the RYNO V Holocard is yours.

The RYNO VI Protosuit Holocard is the second in the game that requires you to win a gold hoverboard race, this time on Kalebo III. As on Rilgar, make sure you hit as many boost rings as possible and look out for shortcuts, and you should be able to win the bronze, silver and gold races without too much difficulty.

The final RYNO Holocard is located right near the end of the game. There’s a corridor that leads you to the final boss, but before that, up and to the left, is a platform. Jump up here using the conveniently placed large crates, then pick up the RYNO VII Holocard. All the RYNO Holocards are now yours.

Get the RYNO gun from the RYNO vendor on Rilgar

Once you’ve got all nine RYNO Holocards, simply head back to Rilgar and talk to the RYNO vendor. He’ll hand over the awesome RYNO gun.

Can the RYNO gun be upgraded?

Just like all weapons in Ratchet and Clank on PS4, you can upgrade the RYNO. Its standard form can be upgraded to Level 5, but buy the Extreme version and it can be taken to Level 10.

How to get the RYNO Extreme gun

Once you’ve acquired the RYNO gun from the RYNO vendor and completed the game to unlock Challenge mode, you can buy the RYNO Extreme by handing over 1 million bolts.