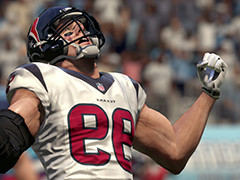 From the main menu, head into Franchise Mode. From here you can choose whether to have a connected or offline franchise. Connected Franchise allows you to connect with friends and be able to interact with their seasons. After this, you can choose which team you either manage or play for. Next, if you wish to play as just the quarterback, you need to change your role to Player in the “Change Role” section of the Customise section.

You can choose whether to play as an active member of current NFL rosters, or create a bespoke player. For this guide, we’ll be going with a created rookie, as it offers far greater customisation.

In order to know what kinds of quarterback you want to be, it’s important to know who your inspirations are.

Making sure that your player has the right build to play how you want is the most basic but important step at the start of your (hopefully) illustrious career in the NFL. For example, if you want to be a giant quarterback who’s almost impossible to sack, you’re going to be in the mould of Ben Roethlisberger. Big Ben is 6’5″ and 240 pounds. If you want an elusive QB who’s comfortable sliding out of the pocket and running for a first down, like Russell Wilson, then you’re going to want to build an athlete who’s closer to the Seahawks leader’s 5’11”, 206 pound frame.

Make sure you build a player fit for the task ahead. American footballers are giants, so look up their builds on Wikipedia before thinking 5’8″, 160 pounds is ‘realistic’.

Once you’ve chosen to create a QB, you’ll have to select from one of four play styles: Balanced QB, Pocket Passer, Strong Arm or Mobile.

Again, the style will depend on which team you hope to play for and which teams you usually play as in Madden. Each will have their strengths and weakness, which you can see below:

Again, choose the style that best suits how you usually play.

Next is choosing where you were picked in the draft. If you feel confident, go as a high draft pick. You’ll be a starter for a low-ranked team, but won’t develop as quickly as others. If you’re happy with a slow start to career, late round pick is the best option. Your player will develop quicker, plus the initial ratings aren’t as bad as undrafted.

In Madden 16 your player will receive objectives over the course of a game. These can appear on the bottom of the screen in the ticker tape, or next to athletes between plays.

Completing these objectives earns XP which can be spent upgrading your stats or buying traits. Some objectives must be completed during a single drive, while others are milestone targets which can be completed over the course of your career or the season. You can view the progress made towards your long-term targets in the ‘Goals’ menu.

By focusing on completing these objectives, you’ll accrue XP faster and be able to upgrade your player.

Which skills you choose to upgrade will depend on the type of quarterback you chose to play as. Of course the first stats you should look to spend XP within are throwing accuracy (of those, long throw should be of lowest priority), awareness, play action (depending on your team’s playbook) and throw power should also get some upgrades early. But from there, it’ll depend on your QB style.

Mobile QBs will want to look at carrying, speed and elusiveness, while pocket passers should improve their throwing most of the time.

Again, take a look at the stats of similar-styled QBs in the game to see where they’re best, and which skills are of low-priority to help guide your spend.