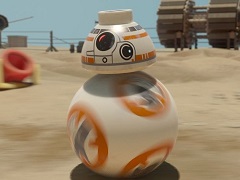 If you’ve played a Lego game before you know the score with these. Red bricks allow you to unlock special and/or weird abilities, which you can turn on and off by selecting the red brick in the bottom of your character wheel. These abilities aren’t free, of course: you have to buy them with studs from the vendor at the back of the Resistance war room at the hub on D’Qar, but you can’t do that until you’ve found the red brick. This guide gives you the locations of all of them.

All red bricks in the main story missions of Lego Star Wars: The Force Awakens

Red Brick on Prologue on Endor

This one is pretty easy, to start you off. As you’re setting up the log swing trap against the first AT-ST, use a small character to climb up into the tree on the left, then push down the cage containing the junk/possible remains of a stormtrooper so it smashes. Instead of using the optional gold build to make a ladder up into the tree, use them on the left to make what is essentially a climbing frame on the left. Go up this and then around to the right, which will bring you out onto a ledge behind the trees, with the red brick on it.

Red Brick on Assault on Jakku

In the first part of the level, the bit called Village Retreat, go over to the right side of the area, where a villager is standing next to a pile of bricks – they’re already smashed and have that gold glow to indicate an optional build. With these bricks you can make a couple of stormtrooper stick figures that the villager can use as target practise. Build one, wait for the villager to shoot it, then build the other. The red brick will appear. The causality between the two events is not immediately apparent, but still. Red brick.

Red Brick on Escape from the Finalizer

When Finn and Poe (or whoever, if you’re in freeplay) have cleared the way forwards by getting some robots to power up a ship indoors, sending it careening off into the hangar, you’ll be stuck in front of and below the control room, with a pile of bricks for an optional build. The left hand build will make a grappling hook gun, the right will power up a lift. For the red brick, as in Buddhism, you need the middle path: a bridge across the gap to get you underneath the control room, where the red brick is floating, all tantalisingly.

This is one of the more convoluted ones, and you can only get it in free play because you need a character who can destroy silver brick objects, such as Chewie. As you’re going through the level watch for the area where you slide under a brown gate, and then find a crashed brown and white ship on the right. Off in the sand dunes is another crashed ship made of silver bricks. Use thermal detonators to destroy it, and wait as patiently as you can. A would be astronaut will come along, build the debris into a rocket, and then crash it again a bit further out. The red brick gets ejected and will, eventually, float down on a parachute to where you’re standing.

Red Brick on The Erevana

You can get this one in story mode really easily. After Chewie has used his thermal detonators to destroy the gate holding back the rathtar, in the first cover shooting section with Han and Chewie, head round to the right into the next room. On the left side of the doors is a big block with a hook for Han’s rope. Use him to pull the front of the block off and the red brick is inside it.

To the left of the front entrance to the garden in front of the castle is a big cracked brick in the wall. You need a large, strong character (basically one of the monsters) to break it open. The red brick is just behind it.

Red Brick on Battle of Takodana

During the flying section of the level, after the front of the castle has been destroyed in a cutscene, fly down to the ruins. The red brick is floating on top of the remains of one of the towers.

Red Brick on The Resistance

Once you’re up on the walkway on the left side of the hangar go to the leftmost end of it, to the cracked brick wall. Use a strong character to break it, revealing one of those tiny grates, and use a small character to go through, bringing you out the other end of the tunnel almost directly in front of the red brick.

After you’ve made your way through the snowy path to the first real fight arena of the level, in front of a First Order door, you should be able to see the red brick floating by on a platform on the left. Smash everything around near where you entered the area and you should get enough bricks to build a snowman at the foot of the wall. Jump on the snowman and use him to get up to the hand holds and shimmy across to the brick. If you’ve got a character with good agility you can also cheat and use the snowdrift right by the red brick to jump up.

Red Brick on Destroy Starkiller Base

This red brick is more hidden, but you can grab it on your first sweep through with story mode. Get to the part where you take a lift up to the next level and the stormtrooper separates from Rey by using his rope to get across the gap to a slightly higher platform, killing two other stormtroopers at the top. From here keep heading right under an arch, and you’ll find a First Order terminal. Decode it with the stormtrooper and go right again. A door at the back will open and send out 15 stormtroopers in waves of three. Kill them all and you can collect the red brick.

As you travel around Luke’s island you’ll reach a large boulder covered with vines, which needs to be pushed down to keep heading up the island. Before you do that, look to the left and you’ll see a load of red and black bricks which a dark force user (e.g. Vader) can pull off the cliff. Behind that is a grate for a small character to get through, and at the other end of the grate is the brick.

All red bricks in the bonus story missions in Lego Star Wars: The Force Awakens

Coming soon! This guide is a work in progress; keep checking back!