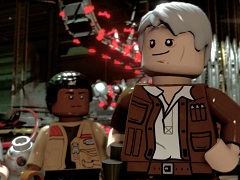 As always there are ten minikits to find on the Erevana mission, and the majority of them are only accessible in free play mode! Luckily we’re here with this guide, which will walk you through where and how to find every single one of them. Collecting all of the minikits on this level will net you the Imperial TIE Bomber vehicle (and the-micro fighter version to use at your leisure).

All minikits in Freighter Battle in Lego Star Wars: The Force Awakens

Minikit 1. You’ll miss a good chunk of the minikits on the Erevana because the first three are all in the same room, which you can only get to in free play. So, when you’ve warped to the two characters on the lower level (notionally Finn and Rey) get through the toxic green gas on the left side of the corridor and then use a droid like C-3PO to use the terminal on the other side. This will open a door to the left, and going through it will bring you out into a secret room. The first minikit is on top of a shipping crate in the corner. Use a character with light force powers (you’ll have access to Luke in free play already) and open up the side of the crate. Smash everything inside to build a little trampoline, and use can use it to jump to the top and get your minikit canister.

Minikit 2. Still in the same room, drop down and go to the left corner, and smash the crates there. You can use the pieces to build a First Order terminal against the wall. Use a First Order character like a stormtrooper to open it up, and you’ll be grabbed by a rathtar. Use the mighty power of QTEs to fight it off and it’ll leave a minikit canister behind when it runs away.

Minikit 3. When the rathtar above goes it also leaves behind some bricks, which you can build into a power conduit for BB-8. Use him to power it up and it turns on the fan against the wall. This then spits out all the bits for a cannister. You can now leave the secret room.

All minikits in Freighter Chase in Lego Star Wars: The Force Awakens

Minikit 5. This is the hardest one to get, simply because it needs timing, but you can get it the first time you play through in story mode. As you’re being chased down the corridor by the rathtar you’ll turn a corner and be side scrolling across the screen. The minikit canister is floating halfway down this stretch, but you need to jump to grab it.

Minikit 6. After saving Finn from the tentacles of the rathtar, move to the front left corner of the room. There’s a crate made of shiny red bricks that a character with dark force powers can smash apart, thus clearing the way for Admiral Ackbar to jump into the pool underneath. Do not pause to question why there’s a pool on a freighter ship. Just know that there’s a minikit canister inside it.

All minikits in Freighter Shutdown in Lego Star Wars: The Force Awakens

Minikit 7. Shoot and kill all of the three bat like creatures in the hold. There’s one either side of the rathtar, and one at the top of the climbing wall on the left side.

Minikit 8. Immediately left of the rathtar are some pipes, which you can bust apart with a character who has dark force abilities (think Darth Vader). Behind them is the minikit canister.

Minikit 9. Go over the the left hand side of the area and get up to the top of the climbing wall, onto the platform there (you have to do this to progress in the level anyway). On the side of the wall is a fan; you might be able to make out the minikit canister just behind it. Use a character with a lightsaber to carve the fan out and get hold of the minikit.

Minikit 10. Now go to the far right of the area (again, something you have to do to get through the level). Once you’ve opened up the shipping crate in the corner, go in and smash everything up. This will reveal a grate which you can send a small character through; they’ll come out on top of the shipping crate and be able to collect the minikit there.