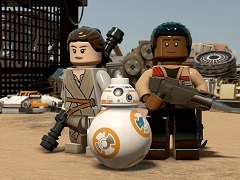 Collecting all ten minikit canisters at the Niima Outpost mission will unlock the quadjumper for you, as well as getting you a gold brick and a warm sense of satisfaction. This guide will give you the location for every minikit in the level, how to get them, and which characters you’ll need as well.

All minikits in Niima Outpost in Lego Star Wars: The Force Awakens

Minikit 1. As you go through the outpost there are three bits of triangular junk with a bird perched on them – you can see one on top of the grate in this picture. There are two others, one just before the area shown in the picture, on top of a sandbank at the back, and one a little further on, next to two sunbathing stormtroopers in the background (you can shoot it and them when you’re in the turret gun you’ve just built). Get all three of them and you win the minikit canister.

Minikit 2. Once you’ve activated the conveyer belt and shot down the junk on top, you can run up it, right to the back. Stay running in place there for a bit and you’ll get some studs, and then a minikit, for some reason. They turn up in the darndest places.

Minikit 3. When you’ve unleashed the happabore (pig monster) and luggabeast (big blue mechanical cow thing) and smashed through into the next arena, you can use one of them again to crack open a broken container, on the right side of the gate. The minikit canister will appear, as if by magic.

Minikit 4. In the same area as above, keep moving right and you’ll find some droids stuck in the sand. You need a character with force powers to do it, but you can get all of them out and return them to the large junk dealer in the corner. He’s so grateful that he opens up a crate with a minikit in it for you.

All minikits in Niima Bombardment in Lego Star Wars: The Force Awakens

Minikit 5. Once the new segment of the level starts you’ll be looking at a troop ship firing at you from the left. Use either the bricks in front of you to build a turret, or a character who can destroy gold bricks (Phasma, for example) and take it out, then the gold bricks on the rock behind where it was. This will drop down a crate that a strong character, like Chewie, can pull open to get to the minikit canister inside.

Minikit 6. As you get to the first cover shooting segment don’t run forwards to take cover, go right and then back. You’ll get to a little junk heap on the side with a broken water pump. Use a character with thermal detonators (Chewie is the first one you’ll have) to break open the taps on the front and it’ll fill a pool in front of it with water. Admiral Ackbar can then dive in and retrieve the minikit.

Minikit 7. When you’ve gotten round the corner and are heading to the Millennium Falcon, you’ll get to the point where you wake up a little sand digging droid. Take him to all the way left to the furthest heap of sand and bricks and he’ll dig out the pieces of a minikit canister for you to throw together. Good lad.

All minikits in Jakku Graveyard Flight in Lego Star Wars: The Force Awakens

Minikit 8. As you’re flying through the wrecks in the first section there are four orange-brown arches going over the track that you can blow up. Take all of them out for the minikit, but keep a sharp eye out; you can fly under them without noticing if you’re not careful.

Minikit 9. Once you’ve gotten into the open arena part of the flight and are shooting down TIE fighters, look over the floor of the area. There are three gold brick bits of wreckage – they look like the remains of AT-AT walkers. Blow them all up for the minikit.

Minikit 10. Near the edge of the area is an enclosed bit of wreckage you can fly into and through. The minikit is in the middle of it. It’s a tight squeeze but you should get it without any issues.