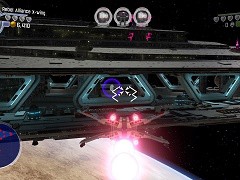 Lego Star Wars: The Force Awakens PS4 Xbox One Minikit Locations for Escape from the Finalizer

This guide will help you net all of the minikit canisters for the Escape from the Finalizer main story mission. Some of them you can only get in free play mode, but you can get a lot of them on your first run through of the story. We’ll tell you where and how to find them in either case. Collecting all the pieces for this level will unlock the Finalizer as a vehicle, which is pretty cool (depending on how evil you are).

All minikits in Finalizer Hanger in Lego Star Wars: The Force Awakens

Minikit 1. This one is an ongoing one. There are four little robots zooming around the level. Destroy them all, ignoring their little robot screams, to get the minikit. The last one is probably the most difficult, because he’s running about during the cover shooting section, but you can still get him.

Minikit 2. This one can only be unlocked in free play. At the start of the level move towards the camera and there are a big stack of brick containers on the left side, in the wall. They can only be moved by a character with dark force powers, but once you’ve gotten them out of the way you can go through the gap into a new hallway. Enter the first room you come to and use your force powers to torture the droid at the end by tickling his feet. He’ll give up the minikit he was hiding, the filthy nark.

Minikit 3. Still in the weird torture room, smash all the furniture around the room and then rebuild it into Kylo Ren’s favourite torture chair. That’s… nice? Anyway, you get a minikit for it. Incidentally, if you carry on going down the corridor to the left you’ll run into the production set for The Force Awakens, with a little J.J. Abrams framing explosions with his Lego hands.

All minikits in Star Destroyer Exterior in Lego Star Wars: The Force Awakens

Minikit 4. There’s a racetrack for this flying section (there is for a lot of flying sections) that’ll reward you with the minikit if you complete it in time. The starting flag is inside the Finalizer so you sort of need to fly through the ship to trigger it – the easiest way is through the side and it’s a big purple chequered flag, so you shouldn’t miss it.

Minikit 5. This one can be tricky, just because it’s easy to miss one or two targets what with the laser light show going on all around you. You need to destroy all the black turrets firing at you from the Finalizer. There are twenty in total, but it will only trigger the minikit if you destroy them in the second phase of the fight. You’ll know you’re at the right stage because when you shoot one you’ll get a counter popping up saying how many out of twenty you’ve done, so keep an eye out. The best technique for taking all the guns out is doing methodical sweeps down each side of the ship, top, middle and bottom to make sure you get them all.

Minikit 6. This minikit is an easy one to miss, because you need to shoot down 5 of the special forces TIE fighters that are dragging pink missiles, and you only need three of those missiles to take out your target and move on in the level. So make sure you don’t accidentally do that, basically. Anyway, shoot down those bad guys and claim your minikit, top gun.

All minikits in Jakku Graveyard in Lego Star Wars: The Force Awakens

Minikit 7. You can only unlock this one in free play, with a character with dark force powers. At the start of the area you’ll probably have already noticed the big wall of shiny red bricks. Use the force to move them and you can get behind to collect the minikit.

Minikit 8. This one you can get in story mode. Once you’re inside the wrecked Star Destroyer go to the back wall of the ruin, as Rey, and then move towards the camera. You’ll see some pipes along the back that you can shimmy along. Move Rey to the right on them, towards the camera again, and you’ll come to the minikit.

Minikit 9. Move along the next level up until you come to the bit where the raiders were playing noughts and crosses in the sand. Next to their game is a door which you can slice open with a character who has a lightsaber (this includes all the force users, and one of the skins of Finn and Rey each, because Luke’s lightsaber gets around). The minikit is behind there, but you need to build it first.

Minikit 10. For this one get both Rey and BB-8 to the door leading out of the wreckage. There’s an optional build and, if you build the bricks to the right, you can make a launcher to shoot BB-8 up to the remains of some ducts above you. Roll him on through to get the last minikit. Voila, you’ve cleared the level.